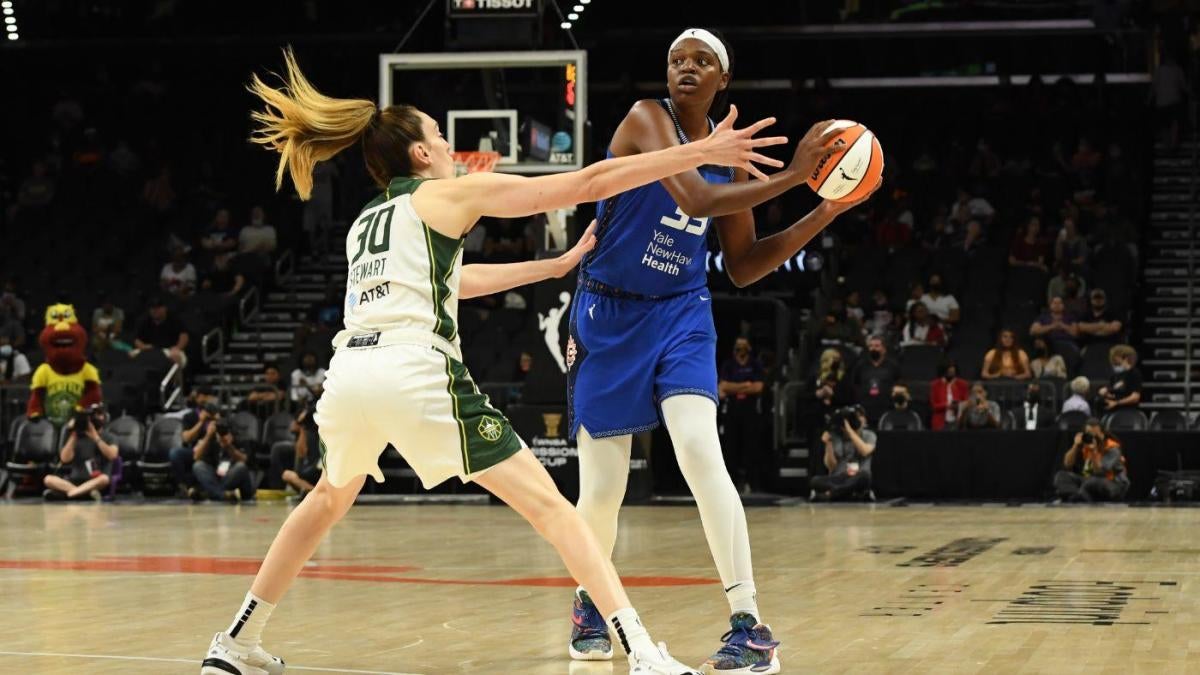 WNBA free agency officially arrived this winter. Although no deal could be finalized until February 1, teams were cleared to start talking to players on January 15. And what a group of players it is. There are five former MVPs coming to market this winter and seven of the 10 players on All-WNBA teams from last season.

It’s sure to be a fascinating few weeks as we wait to see how many of these stars change teams. As the action begins, be sure to follow our tracker which will keep you up to date with all the moves.

For now, here’s a look at the top 10 free agents this year:

From Most Improved Player to Sixth Player of the Year to All-WNBA, Jones has been climbing the ranks for years. Last season, she finally rose to the top and cemented herself as the best player in the world with a near unanimous MVP campaign. Inside scoring, 3-point shooting, rebounding, elite defense, athleticism, Jones has it all. The Sun, wisely, has already placed the base designation on its superstar, giving it exclusive trading rights and making it likely that Jones will get the supermax and return to Uncasville for another title run.

Stewart’s 2021 season ended in disappointing fashion, as she sat on the sidelines in a boot as the Storm were knocked out of the playoffs in the second round. After the season, she then underwent minor surgery to her left Achilles tendon. (She’s already ruptured her right Achilles tendon.) Despite those injury issues, Stewart is still one of the best players in the league and will get another max contract – likely from the Storm. While they decided not to “drown” her, it’s hard to imagine Stewart leaving, especially with Sue Bird returning for one final season.

That Wilson checks in at No. 3 on this list says a lot more about other players hitting free agency than it does about her. One of the most talented players in the league, she’s a former MVP herself and should remain a fixture in this discussion as she continues to improve. Wilson is a restricted free agent, which means the Aces have the ability to match any offer she receives — if she even bothers to listen to other teams. Wilson returning to Las Vegas to play under new head coach Becky Hammon is about as close to a guarantee as you can get in free agency.

After a decade of record-breaking personal achievements but frustrating playoff results, Vandersloot finally got her ring last season and she helped lead the Sky to the franchise’s first WNBA title. There’s no guarantee, however, that she’ll return to Chicago — the only team she’s ever played for — to try and turn the clock back. Vandersloot has “several meetings” planned according to Annie Costabile of the Chicago Sun-Times, and it looks like she’s at least considering her options. If Vandersloot were to go somewhere else, that would be fascinating.

Playing alongside Breanna Stewart and Sue Bird, Loyd has been overlooked at times. Not last season, however, as she hit a career-high 17.9 points per game and made her first All-WNBA first team. With all three of their big names free this winter, the Storm were only able to ‘drown’ one of them and chose Loyd – perhaps an indication that they were more concerned about him leaving. If Loyd wants out, the Storm now has a chance of getting a meaningful return in a sign and trade. If not, she will re-sign and the Storm will once again be one of the title favorites.

Copper has risen from relative obscurity – at least domestically – to play a major role in the Sky’s title race and claim the title of Finals MVP. In the process, she earned herself a big payday. The Sky have opted to “drown” Copper, which they are unlikely to do before the playoffs, and guarantee him a one-year contract at supermax level. It also increases the chances of her returning to Chicago, but a signing and a trade are always possible, especially with all the other moving parts of the Sky this winter. Wherever Copper plays, his ability to get to the basket and hold multiple positions on the other end will make his team better.

Last season was one of the best of Fowles’ career, as she won Defensive Player of the Year, led the Lynx to the No. 4 seed and proved she could. still compete at a high level. Whether it will continue to do so remains to be seen. Now 36, Fowles said after last season that she was unsure about her future and had “some thingsto talk it over with Lynx head coach and GM Cheryl Reeve. If Fowles returns, it would almost certainly be with Minnesota, but retirement is a very real possibility for the future Hall of Famer.

There are no debates about Cambage’s talents; at her best, she is a dominant force at both ends of the court and one of the best bigs in the league. The problem, insofar as there is one, is that it is not always at this level. Specifically for Aces, there’s also the question of whether she’s best suited next to A’ja Wilson. On that front, it seems remarkable that they didn’t give Cambage the base designation. Back in 2019, Cambage expressed a clear desire to play in Los Angeles but was traded to the Aces instead. Could this be the year she finally joins the Sparks? Or will she be back in Vegas after all? Or, maybe, will she sit down, as she has already hinted?

A former second-round pick, Hines-Allen is by far the least well-known name on this list. However, this should not remain the case for long. As she proved in the bubble in 2020, when she took on a bigger role and made the All-WNBA Second Team, Hines-Allen can play. And now she’s going to be paid. As a restricted free agent, she’ll likely be back in Washington, but there’s always a chance another team will come along with an offer the Mystics aren’t willing to match.

Charles is coming off a major rebounding season in which she led the league in scoring with a career-high 23.4 points per game and finished fifth in MVP voting. It should be noted, however, that the Mystics’ brutal injury situation forced Charles to carry the offense on her own, and she averaged a league-high 19.6 field goal attempts. This isn’t to take away what she’s done, but rather to show that it’s unrealistic to expect those kinds of numbers again, no matter where she signs. Still, it’s clear that Charles can still be a highly productive offensive player, especially if his improved 3-point shooting — 36.5 percent on 5.1 attempts per game, both career highs — is real.