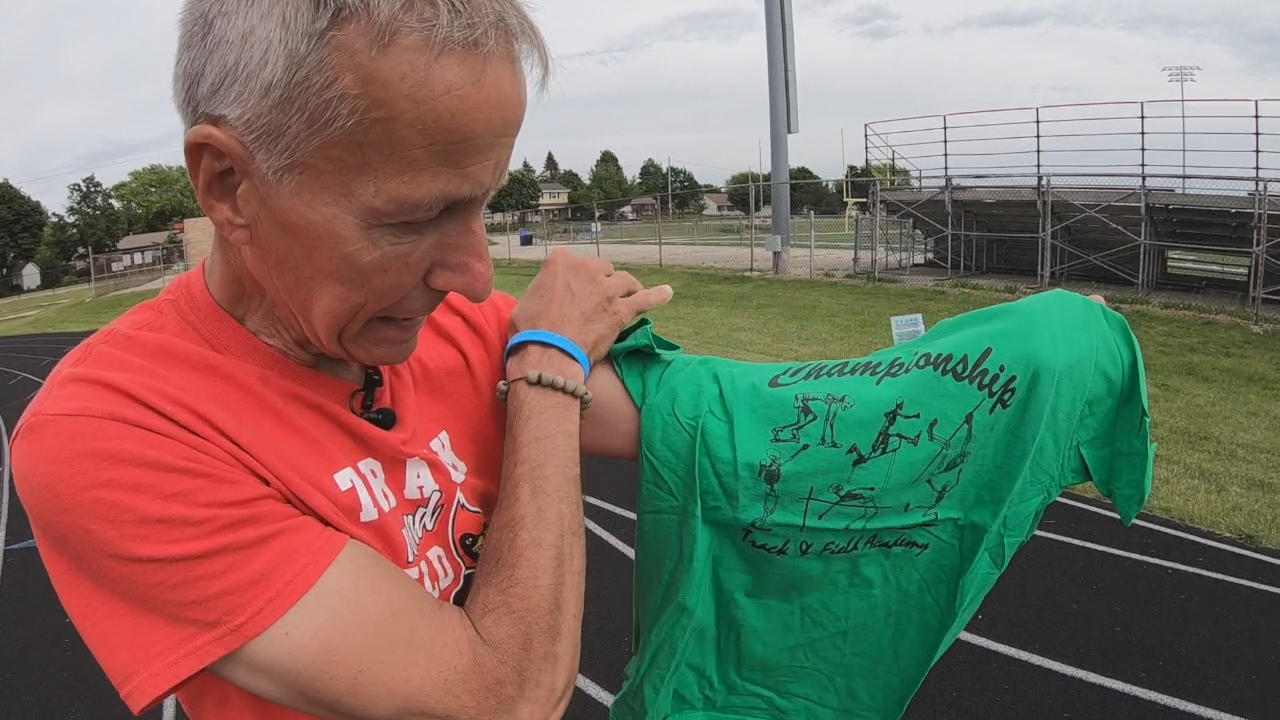 Waukesha coach shirts on my back motivate runners

Every week of the track season since he started coaching, John Barndt of Waukesha South is handing out a former athlete’s jersey to a runner he will consider that week’s athlete of the week.

WAUKESHA, Wisconsin. – If you know John Barndt from Waukesha South, you’ll know he has a lot of shirts, and they’re not just any regular shirts.

“It’s 24 hours a day, 7 days a week,” said John Barndt, cross-country coach and assistant coach for Waukesha South. “I think of the jerseys, I think of the athletes. I think of everything that goes into training.”

Barndt has been a distance track coach and assistant cross country coach for Waukesha South for the past 14 years.

“It’s the best job I’ve ever had in my life,” Barndt said. “I love coaching young athletes.

This love is reciprocal.

“He’s like one of the best coaches,” said Abby Szolyga, sophomore from Waukesha South.

“It just shows that he really cares about us and is invested in our success,” said Reghan Mulder, senior at Waukesha South.

That’s where all those high school and college shirts come in. They are given to Barndt in clusters by his former athletes when they come home from college. He also receives shirts from his coach friends and sometimes he finds more shirts at the clearance sale.

And every week of the track season since he started coaching, Barndt distributes one to a runner he will consider “Athlete of the Week”.

Waukesha South Track and Cross Country Coach John Brandt shows off one of his jerseys, which he presents to his Athlete of the Week. (FOX6 Milwaukee News)

“I’ve been running for 46 years so I have a lot of jerseys and thought I would like to give them something unique and it was a hit immediately,” said Barndt.

There is a lot of thought in its weekly price.

“It normally starts with some kind of weather,” Barndt said. “They can have a hoodie when it’s still cold, so I want to give them something they can wear, but also remember why they had this shirt. One says Waukesha’s athleticism. North. Maybe she beat a girl from Waukesha North and it was a really exciting race and I want her to remember that fact. It’s something special, a jersey that makes sense. “

And who doesn’t want a cool shirt?

“I wear most of them because they’re usually really nice shirts, so I wear them all the time,” Mulder said. “I actually have a huge collection of running t-shirts.”

This week, that honor went to sophomore Abby Szolyga.

“Barndt said I did well, it felt good and I feel like I deserved Athlete of the Week,” Szolyga said.

Above the recognition, the price is much more.

“My main job is to help them become better runners, but that seems to be part of it,” said Barndt. “I want to help them prepare for life. Some of them are life lessons. Have good sportsmanship. I think that’s the foundation of youth sports.”

These lessons resonated with the girls.

“We’re doing things not just for Athlete of the Week, but just because we want to be nice people,” Szolyga said.

“One of the main things he taught me is leadership, so he’s like a track and field and cross country coach, and he’s helped me improve, but he’s also so much more. than that, ”Mulder said.

It might just be a gesture for his runners, but the weight he carries lasts a lifetime. This is thanks to a coach who will never be short of jerseys to give away.