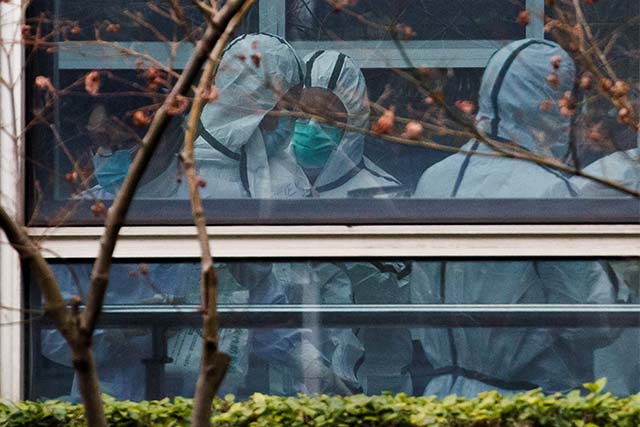 WASHINGTON – U.S. intelligence agencies are examining reports that researchers at a Chinese virology lab were critically ill in 2019, a month before the first cases of COVID-19 were reported, according to U.S. government sources who have warned that there was still no evidence of the origin of the disease. the laboratory.

A still-classified U.S. intelligence report circulating under the administration of former President Donald Trump alleged that three researchers from the Wuhan Institute of Virology (WIV) fell so ill in November 2019 that they sought treatment from hospital, said sources familiar with US intelligence reports and analyzes, speaking on condition. anonymity.

It remained unclear whether those researchers were hospitalized or what their symptoms were, one of the sources said. The virus first appeared in Wuhan, then spread around the world.

“We do not have enough information to draw a conclusion on the origins” of the coronavirus, White House press secretary Jen Psaki said at a press briefing on Monday. “We need data. We need an independent investigation. And that’s exactly what we’re asking for.

Information on the researchers was published in the Wall Street Journal on Sunday.

The origin of the virus is hotly contested. In a report published in March, co-authored with Chinese scientists, a team led by the World Health Organization that spent four weeks in and around Wuhan in January and February said the virus was likely transmitted from bats to humans by another animal, and that “introduction by a laboratory the incident was considered an extremely unlikely route. “

The US intelligence community “has not ruled out any of these hypotheses,” an official US source said. Intelligence reports of possible infections in November among Wuhan Institute employees “cannot be ruled out” by US researchers, the source added.

The hypothesis that the virus escaped from a Chinese lab has been promoted on some conservative websites and by some Republicans in the US Congress. US intelligence agencies have failed to come to their own determination on the cause.

The US State Department issued a “fact sheetOn COVID-19 and the Wuhan lab on Jan.15, 2020, five days before Trump left, based in part on information in the classified report, sources said. Trump, as president, called the pathogen a “Chinese virus” and “Chinese plague.”

The Central Intelligence Agency, National Security Agency and defense intelligence components contributed to both the public fact sheet and the classified report, the sources said. Both were assembled by the office of the director of national intelligence.

US agencies are concerned that WHO officials have not been able to conduct independent investigations in China into the origins of COVID-19 and are therefore wary of the WHO findings, a US government source said. informed of these inquiries.

“We continue to have serious questions about the early days of the COVID-19 pandemic, including its origins in the People’s Republic of China,” a White House National Security Council spokesperson said.

In their own report on the origins of COVID-19 released last week, Republican members of the U.S. House of Representatives intelligence committee claimed there was “significant circumstantial evidence” suggesting that COVID- 19 “could have been a leak” from the Wuhan laboratory.

That evidence included information indicating that “several researchers” at the lab had symptoms of COVID-19 in the fall of 2019, according to the report.

The WHO, which opened its annual ministerial meeting on Monday, did not announce any follow-up to the Wuhan mission, but member states could raise concerns in speeches at the week-long forum. US Secretary of Health and Human Services Xavier Becerra is due to speak on Tuesday.

The pandemic has killed more than 3.4 million people around the world.

—Report by Mark Hosenball; Additional reporting by Andrea Shalal in Washington and Stephanie Ulmer-Nebehay in Geneva; Edited by Will Dunham and Heather Timmons

The ups and downs of agency profitability in the first quarter and the way forward after the pandemic: Reagan