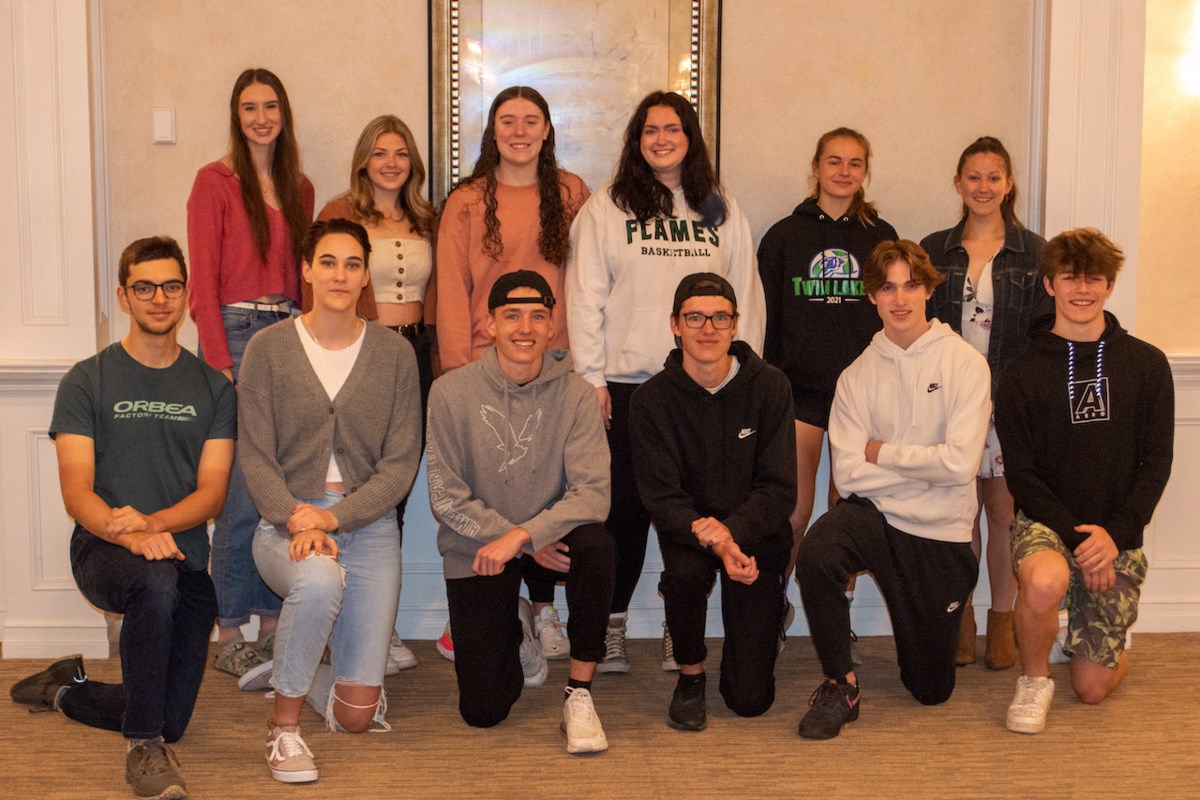 “You can’t figure out how to succeed without accepting and then understanding your failures,” Hall of Fame inductee Mark Shivers told young athletes.

Some of Orillia’s top high school athletes and student leaders were recognized this morning at the Sport Orillia Champions Breakfast.

Athletes from Orillia’s three high schools were honored for their dedication to sport and their achievements in various sports.

World-class swimmer Mark Shivers, who will be inducted into the Orillia Sports Hall of Fame in a sold-out gala Saturday night at Hawk Ridge Golf Club, was the guest speaker at the event.

He encouraged young athletes to persevere in their sporting journeys.

The chills reminded the athletes to stop along the way to “smell the roses,” to revel in their youth and enjoy every experience.

“Your sporting journey passes quickly,” he said. “Enjoy the connections you make and the places you visit, and remember to keep a balance in life.”

Each high school in Orillia has selected four students who will be recognized during the breakfast at the Best Western Plus Mariposa Inn and Conference Center.

Buck competed in figure skating, basketball, badminton, track and field, and volleyball. She won a silver medal at the Ontario Federation of School Athletic Associations (OFSAA) tournament in discus and was national champion in discus and javelin.

Moore played a variety of sports throughout his high school career, including flag football, volleyball, and ultimate Frisbee. Outside of school, she won the Ontario Volleyball Association’s Excellence Award as an U15 and U17 athlete.

Glass is a multi-sport athlete who has competed in volleyball, basketball, badminton, lacrosse and ultimate Frisbee. She has received several MVP accolades during her sports career at OSS and has helped teams to several championships. Most notably, she was part of the OSS senior women’s basketball team that won an OFSAA silver medal while in 10th grade.

Sweet is an elite cyclist who travels internationally to compete. He finished in the top 10 at national championships and the Canada Cup. He hopes to make Team Canada and compete at the world championships.

Noble is a multi-sport athlete at TLSS. She is captain of the Simcoe County Athletic Association (SCAA) college flag football championship team. Her main sports include volleyball, where she is the center and captain of the school team that won an SCAA junior championship, and slo-pitch, in which she was named rookie of the year in 9th grade.

Corston is the captain of the TLSS senior volleyball and basketball teams that won the SCAA championship this year. He also plays ultimate frisbee and mixed volleyball.

For Courtney, success didn’t come right away in Grade 9, but due to her work ethic and drive, the Grade 12 student carved out an impressive career in high school, noted Andrew Corry , teacher at the TLSS.

He said Courtney was an important part of the SCAA Championship volleyball and basketball teams last season. Courtney also competed in track and field this year, qualifying for the OFSAA Regional Championships in the high jump and long jump.

The Winkel twins are known at school for being kind, welcoming and easy-going, teacher Curtis Columbus said. The duo co-captains the boys’ hockey team and helped help the team win a GBSSA championship. They are also co-captains of the school’s volleyball team.

Landon is an invaluable asset to PF on and off the basketball court, Columbus said. She is a peer helper in the basketball class taught at school and is always ready to help with game day operations for school sporting events.

Clarke is another basketball star at PF and is one of the leaders of the volleyball team, Columbus explained, adding that Clarke is a “leading by example” type of player who is always the last in training.

The Breakfast of Champions is held annually on the Thursday before inductions into the Orillia Sports Hall of Fame to recognize the accomplishments of local student-athletes.