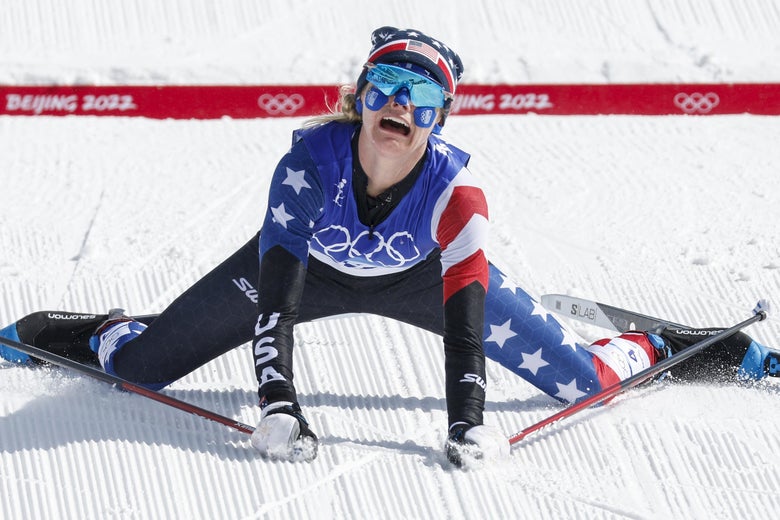 On Sunday, in a stadium packed with athletes from around the world, International Olympic Committee President Thomas Bach closed the Beijing 2022 Games with a recitation of all the ways they don’t really matter. “This unifying power of the Olympics is stronger than the forces that want to divide us,” Bach said. “You are giving peace a chance. May political leaders around the world be inspired by your example of solidarity and peace.

The athletes in the audience cheered, though the more discerning among them surely recognized the vacuity of Bach’s rhetoric. For the duration of the Winter Games, after all, Russia had been threatening to invade Ukraine without provocation, and it will not back down just because Anna Shcherbakova won a gold medal in figure skating. The Games themselves took place in a country that is currently pursuing a policy of what the United States has called “genocide” against a majority Muslim minority group in the Xinjiang region; the Olympics are unlikely to end up making life easier for Uyghurs.

The Olympic Games exert a unifying power, if only in the sense that much of the world comes together to watch and participate in them. But it’s on days like Sunday, when sporteaucrats talk about transcendence as the world teeters on the brink of collapse, that the Olympic movement’s empty geopolitical promises seem particularly hard to stomach. The Winter Olympics don’t seem to have inspired Russia’s Vladimir Putin or China’s Xi Jinping to peace. If it inspired them, it probably got them thinking about what else the world will allow them to do.

Needless to say, no one really thinks the Olympics will bring world peace, not even Thomas Bach. And I’m sure Bach also doesn’t expect the international community, in the “spirit of Olympic solidarity”, to be so moved by the outcome of the Games that it “gives equal access to vaccines to all in the world,” as he said to applause on Sunday. That would be nice, but that’s not how the world works, and Bach knows it. Naive men don’t rise to the top of the CIO.

And yet, at every closing ceremony of the Olympic Games that I can remember, IOC officials such as Bach gave equally lofty speeches about the Games’ purported power to unite the world and, in so doing, to make the world better. Sporteaucrats need this narrative, however empty. At the macro level, this is the only way to justify the sustainability of the Games.

The Olympics are one of the most pointless and frivolous things humans do. They cost untold billions every cycle, and the people in the cities where they usually occur don’t want them. The power of the Olympics is often wielded by autocrats who hope to use them to whitewash their authoritarian or expansionist ambitions, or by everyday crooks who see them as a vehicle for personal enrichment.

At the very beginning of these Winter Games, I wrote that every Olympics I covered were, in their own way, indefensible. The Beijing Games did not reverse this trend. Likewise, the rhetoric world leaders use to justify the Olympics is also mostly indefensible, not to mention consistently inaccurate and largely self-serving. The Olympics will not save the world. The world will destroy itself, no matter who wins gold in ice dancing.

And yet, part of me still feels like the Olympics still matter, and I think the best argument for why they do was made earlier on Sunday, when cross-country skier Jessie Diggins won the last American medal from the 2022 Winter Games. If Thomas Bach’s stupid speech explains why the Olympics should be put in a rocket and launched towards the sun, the individual courage of Jessie Diggins shows us why they still mean something despite everything .

Diggins is my favorite contemporary American Olympic hero. She excels in a sport that Americans don’t like and are bad at. As a competitive sport, cross-country skiing is simply not as popular in the United States as it is in countries where the weather is consistently cold and snowy enough to make cross-country skiing an optimal mode of transportation. It’s also unpopular because it’s extremely difficult: like running a marathon, except it’s much more painful, plus you can’t wear shorts. Diggins said that when she ran, she inevitably entered what she called “the cave of pain,” a space in her mind that was carved out by the combined force of her pain and her will. Americans generally do not want to enter the cave of pain! Americans tend to want to pay other people to enter the cave of pain for them.

In 2018, Diggins and teammate Kikkan Randall shocked the world when they combined to win gold in the women’s team sprint event. It was the first-ever Olympic gold medal for the United States in cross-country skiing, a sport historically dominated by the Nordic countries and Russia. It was also the first Olympic cross country medal for the United States, period, since Bill Koch won silver in the men’s 30 kilometer race in 1976. Until this year, those two medals were the only Olympic cross-country medals that the United States had never won.

During her two weeks in Beijing this year, Diggins won two more medals: a silver in the women’s 30 kilometer mass start and a bronze in the women’s sprint. In many ways, although she didn’t win another gold medal, her 2022 Games were perhaps even more impressive than her performance in Pyeongchang. She competed in six separate events spanning 15 days, starting with the 15 kilometer skiathlon on February 5 and ending with the 30 kilometer mass start on Sunday. She was in the pain cave almost all the time she was in Beijing.

The Cave of Pain was at its deepest on Sunday. For starters, it was awfully cold – cold enough that at the end of the men’s race that same day, a Finnish skier had to seek medical attention for his frozen penis. (In the immortal words of Dave Barry, I’m not making this up.) Diggins had her own problem to solve: 30 hours before the start of the race, she had contracted food poisoning. Perhaps it was because of this that his legs began to cramp after 13 kilometers, forcing him to ski the last 17 kilometers in physical agony. After the race, she said that when she collapsed at the finish line, she felt like she was going to die.

And yet Diggins didn’t die, and Diggins didn’t quit, even if you or I, if we had been on his skis, would probably both have quit. and deceased. (Cross-country skiing is very hard.) That’s the difference between Olympic heroes and people like you and me: They choose to head straight for the cave of pain over and over again. Diggins continued and skied so well she crossed the finish line less than two minutes after winner Therese Johaug of Norway. His silver medal was the best individual USA cross country finish since 1976. And it reminded me of the real reason the Summer and Winter Games might still be worth it. .

Every two years, the Olympic Games offer us rhetoric and courage. The rhetoric of the Olympics is almost always devoid of any courage. The courage of the Games lies in the individual effort of participants and teams. The leaders of the International Olympic Committee want you to believe that the Games matter in a way that they absolutely do not: that they have in themselves an important geopolitical importance, that they are a powerful force for peace world. And yet, the events of the Games offer countless individual examples of why they do important, in that they offer countless examples of individuals pushing their limits in order to test the depth of what is inside of them, walking straight into their own caverns of pain in order to see ‘or they will.

There is something elegant, transcendent and essentially human in the image of Jessie Diggins trudging around a freezing snow circle, with leg cramps, in freezing weather, having just had a poisoning food, having already skied five other races during the Olympics. “I don’t know how I got to the finish,” she said after the race, and there’s something glorious about the fact that she did, and that she even nabbed a silver medal in the process. It speaks to something big about the human mind, or something crazy about it, or both. Jessie Diggins won’t get rich after her 30 kilometer mass start. She will not exploit her performance in Beijing in a multimillion-dollar cross-country contract. She did it for no other reason than she decided she wanted to do it, and to test her resolve against a bunch of other maniacs who decided they wanted to do it too.

Shortly before Bach spoke on Sunday, Diggins and the rest of the 30 kilometer mass start medalists secured their medals on a podium in the middle of the stadium in front of all the Olympians amassed in all winter disciplines. The joy on his face almost brought me to tears, and not just because after two weeks of continuous coverage of the Olympics, I’m delirious from lack of sleep. The Olympic Games are important because they give us so many opportunities to see people test their physical and mental limits in so many ways, and to admire and perhaps even learn from their examples. The Games help us realize that, if Jessie Diggins hasn’t crumbled, then maybe you and I can find the strength to carry on – and maybe, if we keep moving forward in our own caverns of pain , there will eventually be a reward for us too.