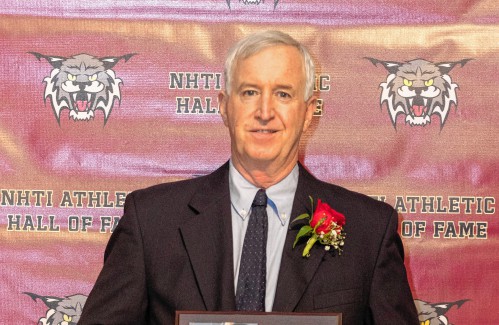 Hogan’s teaching, coaching and administrative career includes stops along the way at Woodsville, Litchfield, Laconia, Plymouth State and Spaulding High School in Rochester before coming to NHTI in 1999.

The legendary coach and world leader in athletics leaves a strong and lasting legacy in NH sports circles with his coaching resume and the development of NHTI into a small college sports powerhouse.

“NHTI has been a very special place for 23 years,” Hogan said. “My time with our Lynx will always be appreciated. I look forward to continuing my relationship with NHTI in a different role as we enter a new chapter in my life.

Here are some career highlights from one of NH’s most legendary coaches and leaders in sports:

■ Inducted into the Plymouth State Hall of Fame (2007)

Hogan is also responsible for running numerous basketball camps and tournaments throughout the state, and NHTI’s Sports Management Department has been in charge of the annual Capital Region Basketball Tournament for several years. .

Hogan will officially retire from NHTI on August 1. He will step down as a full-time athletic director and men’s basketball coach, but will continue as an adjunct professor in sports management and business at NHTI.

How much $200 million does Conor McGregor make from Maclife? Is he the owner?