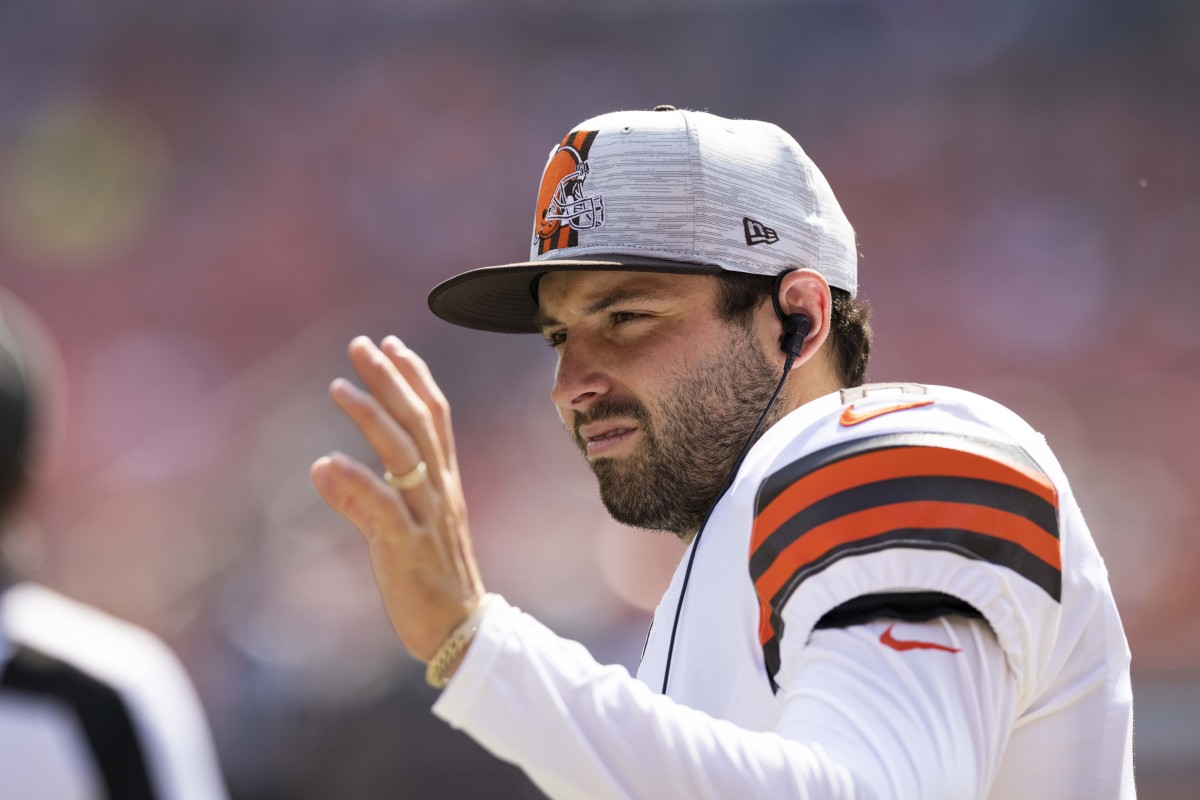 With the 2022 NFL season taking shape, the roster should have more turnovers than a bakery with free agents in, out and draft picks staking their spot on the roster.

Who else is in the hot seat? Who will receive a pink slip? Follow FalconReport.com for up-to-date information on all moves.

The Atlanta Falcons are weeks away from naming Marcus Mariota as their starting quarterback, but now the rival Carolina Panthers have named their starter.

Baker Mayfield won the starting job for the Panthers from Sam Darnold and will start Week 1 against his former team, the Cleveland Browns.

The Browns traded Mayfield earlier this offseason for a conditional draft pick after the team acquired Deshaun Watson in March.

Mayfield is scheduled to meet the Falcons on October 30 in Atlanta.

With NFL teams required to reduce rosters from 90 players to 85, the Atlanta Falcons, which stood at 89 at the start of the day, released four players.

Punter Seth Vernon, linebacker Rashad Smith, tight end Tucker Fisk and defensive back Tre Webb are the four who failed to make it past the first round of cuts.

Smith, Fisk and Webb were all considered camp bodies from the start, but Vernon entered the preseason as one of only two punters on the roster, giving him a fighting chance for the job. However, with his release, the Falcons have all but committed to veteran Bradley Pinion to be the starting punter.

The Falcons will have to reduce the roster from 85 to 80 next Tuesday.

AUGUST 12 A KOREAN FAN MEETS KOO AFTER A LONG JOURNEY

Koo, who turned 28 last week, grew up in Seoul and moved to New Jersey when he was in sixth grade. He is also the only active player of Korean descent in the NFL.

The former Georgia State is entering his fourth season with the Falcons.

The Falcons have released their uniform schedule for the 2022 season, detailing the dates the team will wear each jersey.

The Falcons will wear their alternate red helmets in Week 6 against the San Francisco 49ers and Week 13 against the Pittsburgh Steelers. Atlanta will wear the defaced jerseys in a Week 11 game with the Chicago Bears.

For the rest of the season, the Falcons will be in their usual colors of black for home games and white for travel.

AUGUST 8 ANOTHER TITAN IN A-TOWN

According to reports, the Falcons are signing former Titans tight end MyCole Pruitt to a one-year contract. Pruitt also recently worked for the New Orleans Saints.

Drafted by the Minnesota Vikings in the fifth-round draft from Southern Illinois, Pruitt spent last season with the Titans as a replacement for Jonnu Smith. before suffering a season-ending injury, Pruitt posted a career-high 14 receptions for 145 yards and three touchdowns in 16 games.

Prior to joining the Titan, Pruitt also played for the San Francisco 49ers, Houston Texans, Buffalo Bills and Chicago Bears. At Southern Illinois, he was an All-American and caught 211 passes for 2,601 yards and 25 touchdowns.

The 6-foot-3, 297-pound Anderson has already made stops in Chicago, Minnesota, Tennessee and Green Bay. An undrafted free agent in 2018, Anderson played in 10 games, recording six total tackles and one sack.

The Falcons defensive line suffered several knocks over the past week in training camp, as Vincent Taylor suffered a torn Achilles and Bryce Rodgers suffered a knee injury.

The addition of Anderson gives Atlanta 10 defensive linemen as the team prepares for its preseason opener on Friday.

Black was originally signed by the Packers as a post-2020 NFL Draft UDFA. Black, 25, has appeared in all 17 games for Green Bay in 2021, playing both secondary and special teams.

JULY 28 MCCLURE AT RING OF HONOR The Falcons announced today that offensive lineman Todd McClure will join the franchise’s Ring of Honor.

McClure, a 7th round pick in the 1999 NFL Draft, played his entire 13-year career with the Falcons and started 195 games for the team until his retirement in 2012.

26 JULY SANU SIGNS WITH THE DOLPHINS Miami Dolphins add veteran receiver Mohamed Sanu to their receiving corps, by his agent.

Sanu spent the 2016-19 seasons with the Falcons and appeared in Super Bowl LI with the team.

Since leaving the Falcons, he has played for the New England Patriots, San Francisco 49ers and Detroit Lions. Now he will team up with Tyreek Hill and Jaylen Waddle in Miami.

JULY 25 THE FALCONS WORK THE CORNERS The Falcons invited two cornerbacks for practice on Monday, by Aaron Wilson of Pro Football Network.

Demarkus Acy spent training camp last season with the Pittsburgh Steelers before tearing his anterior cruciate ligament. Cortez Davis signed as an undrafted free agent with the Denver Broncos but was released earlier this offseason.

JULY 24 ‘METCHIE FROM BAMA TO LEUKEMIA Alabama product and Houston Texans rookie catcher John Metchie III has announced he has been diagnosed with leukemia. His statement:

“Recently I was diagnosed with APL (acute promyelocytic leukemia), the most curable form of leukemia. I am currently receiving excellent medical care, am in good spirits and expect to recover later. As a result of this diagnosis, I will probably not play football this season. My main focus will be my health and recovery. Thank you in advance for your support and good wishes. I can’t wait to come back stronger than ever. God protects you.”

Metchie was drafted by the Texans in the second round of this latest draft and was expected to compete for a starting role on offense this season. We wish him good luck in his fight. Learn more here.

After losing the college football playoff semifinal on the last day of 2021, Ridder has achieved a number of major milestones in 2022.

In April, the Falcons drafted him with the 74th pick in the draft.

This fall, he will participate in his rookie season in the NFL, but he will do so as a married man.

JULY 21 QB MOVE The Cleveland Browns, in a bit of QB limbo, are signing former first-rounder Josh Rosen to a one-year contract, according to an ESPN report. Rosen, just 25, will join his sixth NFL team after a “cup of coffee” in 2021 spent in Atlanta.

The Browns may have to use Jacoby Brissett as their top QB depending on a league suspension that could be coming for Deshaun Watson.

JULY 11 INJURY UPDATE Falcons cornerback Isaiah Oliver is always coming back of his ACL tear and surgery in 2021, with ESPN reporting rehab “on track.”

“Just make sure you keep it straight and in good headspace,” cornerback AJ Terrell said. “And just let him know we got him and just take care of his body and get back as soon as possible.”

The injury will probably not allow him to start camp right away. But Oliver takes the right approach.

“I’m basically getting, like, a redesign,” Oliver said. “I’m starting again this year, being in the same system with the same team and the same guys.”

Hawkins was considered a quality undrafted free agent and signed with Atlanta shortly after the draft. Now, the former Wolverine will have the chance to sign with one of the league’s 31 other teams before the start of training camp later this month.

JULY 6 BAKER EXCHANGE TO THE PANTHERS The Carolina Panthers acquired quarterback Baker Mayfield from the Cleveland Browns in exchange for a conditional fifth-round pick in 2024. NFL Network was first to report the new.