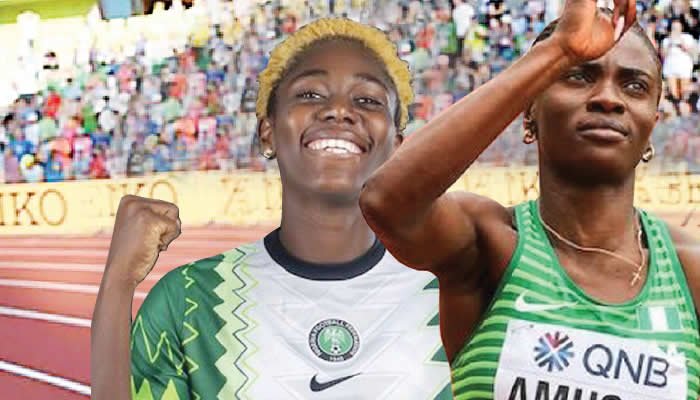 First, it started with “what a man can do, a woman can try”.

But today, the saying goes: “what a man can do, a woman can do too much”.

Nigerian female athletes are a shining confirmation of the latest coinage of the adage, going through their phenomenal performances over the years.

Apart from the recent success of the country’s U-17 and U-20 men’s teams in the WAFU-B tournament, it has been six years since the country’s male athletes have brought smiles to Nigerians in international competitions.

It was then that the U-23 team led by Samson Siasia won the bronze medal by beating Honduras 3-2 in the match for third place in men’s football at the Rio Olympics in Brazil.

The performances of Nigerian male athletes have been nothing short of a disappointment compared to those of women, confirming the popular saying of Chilean writer Isabel Allende, “A man does what he can; a woman does what a man cannot.

In the past, Nigerians often looked up to male athletes for medals at world events. And they did. But over the years, the tide has turned, with women now fully in the driver’s seat.

Below, we take a look at the outstanding performances of the nation’s female athletes…

Tobi Amusan: Rave of the moment Amusan is the world record holder in the women’s 100m hurdles after clocking a record 12.06 seconds in the final on Monday to become Nigeria’s first ever world champion, beating Jamaican favorite Britany Anderson (12.23 seconds) and Olympic champion Jasmine Camacho -Quinn (Puerto Rico), who also finished in 12.23 seconds.

Despite several missed opportunities at previous world championships, the Ijebu Ode-born athlete had been African and Commonwealth champion, before her biggest feat in Oregon.

At the 2018 Commonwealth Games in Australia, she overtook 2015 world champion Danielle Williams to win gold in shocking fashion and hasn’t looked back since.

Ese Brume: The ever consistent long jumper more than any other Nigerian deserves a medal. The 26-year-old has never let the Nigerians down and has always represented the country very well.

Brume finished second in the long jump in Oregon, behind German Olympic champion Malaika Mihambo, who won gold with a final jump of 7.12 meters.

The 26-year-old had been by far the most consistent Nigerian athlete at the world championships for the past three years, winning bronze medals at the 2019 World Championship and Tokyo 2020 Olympics.

The Ughelli born athlete boasts of 16 medals in her cabinet, from different international competitions, a feat no Nigerian athlete can boast of.

Asisat Oshoala: The Super Falcons striker is the record holder for the most CAF Best Player awards (both male and female) after recently winning the Best Female Player award for a record fifth time.

On the men’s side, it has been 23 years since a Nigerian won the award, with Nwankwo Kanu last winning it in 1999.

Oborududu Blessing: The freestyle wrestler is currently ranked second in the world and the first Nigerian wrestler to win an Olympic medal.

The phenomenal wrestler, often considered one of the greatest of all time, has won a gold medal at the African Wrestling Championships every year for the past 11 years except for 2012, when she did not participate in the competition.

She is also a 10-time African champion from 2010 to 2020, with some of her recent accomplishments including winning the gold medal in the 68kg event at the Yasar Dogu tournament in Istanbul, Turkey this year.

She followed that up with another gold medal at the 2022 African Wrestling Championships held in El Jadida, Morocco.

Falcons/Falconets/Flamingos: While the Falcons’ fourth-place finish at the just-concluded Women’s Africa Cup of Nations in Morocco may have been a disappointment to some, there is no doubt that they are still miles ahead of their male counterparts in terms of achievements.

Without their key striker, Oshoala, the Falcons managed to get the job done by securing a spot at next year’s World Cup, which the Eagles were unable to achieve.

The Eagles, not only were they knocked out of the Africa Cup of Nations in the Round of 16, but they also failed to pick a ticket to football’s biggest showpiece after a lackluster performance against the Ghana.

It should also be noted that the Falconets and the Flamingos have all qualified for the World Cup in their categories.

Prioritize Ofili: At 19, Ofili, a specialist in the 200m and 400m, has eight medals – five gold, one silver and two bronze – representing the country.

Odunayo Adekuoroye: Despite the disappointment of the Tokyo 2020 Olympics where she surprisingly failed to medal, wrestler Adekuoroye remains a medal hopeful in Nigeria.

A 17-year-old Adekuoroye competed at the Commonwealth Tournament in India for the first time in 2010, winning bronze in the 48kg category.

After putting aside her failure in Tokyo, she won her seventh consecutive gold medal at the 2022 African Wrestling Championship in El Jadida, Morocco.

According to United World Wrestling, the 28-year-old is ranked fourth in the women’s 57kg category and is one of the most famous wrestlers in the world.

Ifiaezibe Gagbe: Domestically, it was swimmer from Bayelsa Gagbe who was the star athlete of the 2020 Edo National Sports Festival, winning an incredible 15 medals at the event.

The athlete won eight gold, two silver and five bronze medals to become the most decorated athlete of the 20th edition of the festival.

Aminat Idrees: The Lagos-based athlete did the unthinkable in Benin City, winning gold, silver and bronze medals in the Taekwondo Poomsae event, with an eight-month pregnancy, at the 2020 sports festival.

The 26-year-old, who represented Lagos, won gold in the Mixed Poomsae category, silver in the Team Poomsae and bronze in the Individual Poomsae to become the poster child for the event.

Stephanie Onusiruka: Another athlete who stole the show at the festival in Benin was 10-year-old gymnast Onusiruka, who performed for the Anambra team.

She won gold, two silvers and a bronze in gymnastics, surpassing any male athlete her age, and was one of the incredible talents to grace the sports fiesta.

Commonwealth Games 2022: Updates from all New Zealand teams and athletes in action on day one