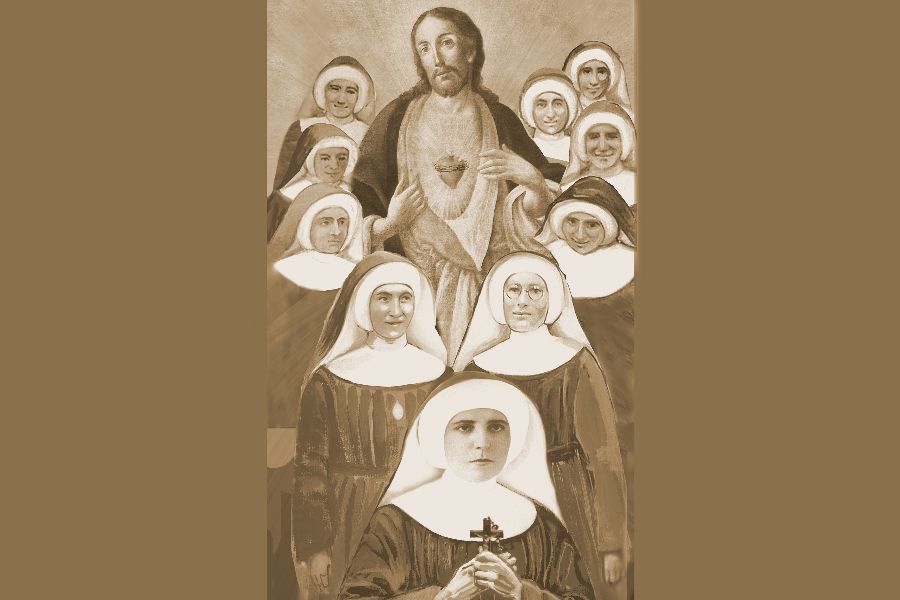 Meet the 10 new Blesseds of the Catholic Church

When one of the soldiers tried to force the sister out of the room, she successfully resisted, clinging to the cross and calling on Mary for help: “Holy Mother of God, allow me to die virgin, protect my purity!

On March 1, 1945, while the sisters were praying and Sister Maria Sabina repeated her request to Mary, a bullet pierced the door and struck her in the chest, killing her. She was buried in the Catholic cemetery in Lubań.

Blessed Sister Maria Melusja (Marta) Rybka was born on July 11, 1905 in Pawłow, near Racibórz. She entered the Congregation of the Sisters of Saint Elizabeth in 1927 and made her perpetual vows on July 31, 1934. She spent her life as a nun at the Maison Saint-Georges in Nysa, working in the garden and the bakery, and doing household. . During World War II, she cared for the elderly and sick and cared for girls in housekeeping school.

On March 24, 1945, Sister Maria Melusja was attacked and shot by a Red Army soldier while defending a girl who was being assaulted. According to witnesses, the sister saved the house from the fire, because the fire started by the soldiers stopped in front of the room where the body of the sister lay in a pool of blood.

The sister’s body is buried in a mass grave in the Sisters’ Garden at 16 Słowiańska Street in Nysa.

Blessed Sister Maria Sapientia (Łucja) Heymann was born on April 19, 1875 in Lubiesz, near Wałcz, in northwestern Poland. She entered the Congregation of the Sisters of Saint Elizabeth in 1894 and made her perpetual profession on July 2, 1906. She worked as a nurse in Hamburg and then in Nysa.

When the Red Army entered Nysa, the atmosphere of fear and uncertainty increased. On March 24, 1945, soldiers ordered the sisters of St. Elizabeth’s house to assemble in the refectory. One of the soldiers approached a young sister and wanted to take her away. Blessed Maria Sapientia implored him to give up saying, “No, I beg you, no”. The soldier put his gun to his head and fired.

Her mortal remains were buried in a common grave in the monastery garden of St. Elizabeth’s House in Nysa.

Blessed Sister Maria Acutina (Helena) Goldberg was born on July 6, 1882 in Dłużek, then in East Prussia. At 23, she joined the Sisters of Saint Elizabeth and made her perpetual vows on July 25, 1917.

For many years she worked as a nurse in a spa sanatorium in Wleń and in a home for retired priests in Nysa. From 1941 she worked in an orphanage in Lubiąż as a guardian of war orphans.

Aware of the brutality of the Red Army soldiers who entered the city on January 26, 1945, Sister Maria Acutina continually watches over the safety of the girls entrusted to her care. On May 2, 1945, she was shot while defending them.

The body of Sister Maria Acutina was buried in the parish cemetery of Krzydlina Mała, in southwestern Poland.

In 1912, she joined the Sisters of Saint Elizabeth and made her perpetual vows on June 29, 1924. She worked in Ramułtowice, Szklarska Poręba, Wałbrzych-Sobięcin and Godzieszów, where she was superior of the local communities.

As the Red Army approached, Sister Maria Adela decided to stay and care for the elderly women in her care. After Red Army soldiers took the village, she and her proteges found shelter at the farm of Maria and Paul Baum.

On February 25, 1945, a soldier broke into the house. Blessed Maria Adela, defending her accusations and her vowed chastity to God, was shot, along with her hosts and others staying there. All were buried in Godzieszów, in southwestern Poland, on the farmer’s property in a bomb crater, where later a plaque was erected to commemorate their deaths.

Another victim of brutality by Soviet troops was Blessed Sister Maria Adelheidis (Jadwiga) Töpfershot down on March 24, 1945.

She had great pedagogical skills and for many years she was a teacher and director of a housekeeping and handicraft school in Koźle, and from 1942 at St. George’s boarding school in Nysa.

In 1943 she was moved to St. Notburga House in Nysa. During the Soviet occupation of the city, the sick and the elderly took refuge with the sisters. Sister Maria Adelheidis stayed with them. Despite extremely difficult living conditions, she always found a place and offered help to those who needed it. She was the soul of the house.

As the soldiers wandered through the building, a Red Army man entered the room where the sister and her charges were staying. Provocatively, he showed his bleeding hand and asked who had fired from the room. Although everyone honestly denied it, he shot Sister Maria Adelheidis. His body was buried in the Jerusalem Cemetery at Nysa.

Blessed Sister Maria Felicitas (Anna Ellmerer) was shot down at Nysa on March 25, 1945.

She was born on May 12, 1888 in Grafing, near Munich. She entered the Congregation of the Sisters of Saint Elizabeth, making her perpetual profession on July 5, 1923, working as a teacher and tutor in Düsseldorf, Kup and Nysa.

Soviet soldiers stationed in St. Elizabeth’s House constantly disturbed the sisters, who experienced days of fear and terror. The superior of the house begged them to leave the sisters alone. In response, she was struck with the butt of a rifle and knocked unconscious. Sister Maria Felicitas rushed to her aid. A soldier took advantage of this and tried to drag her out. As the sister defended herself and resisted, he fired a warning shot.

In response, Sister Maria Felicitas stood against the wall, stretched out her hands in the shape of a cross and shouted aloud, “Long live Christ the K…!” The last word was interrupted by a deadly bullet. The killer stomped on his victim’s head and chest with his heavy boots.

The sister’s mortal remains are buried in the monastery garden at 16 Słowiańska Street in Nysa.

A prayer for the necessary graces through the intercession of Blessed Mr. Paschalis and the Nine Companions:

Lord Jesus Christ crucified and risen,
You have strengthened Blessed Maria Paschalis and her Companions
sacrifice their lives.
By defending the dignity and chastity of a woman
as well as performing acts of mercy,
they remained faithful to you
to the shedding of blood.
May the example of their lives encourage us
to generous service to our brethren
and to the zealous fulfillment of your commandments.

Through their intercession, grant us the favors
that we ask you with confidence,
you who live and reign forever and ever.
Amen.

The staff of the Catholic News Agency (CNA) is a team of journalists dedicated to covering news concerning the Catholic Church around the world. Our offices are located in Denver, Washington and Rome. We have sister language agencies in Kenya, Germany, Peru, Brazil and Italy. CNA is a service of EWTN News. You can contact us at [email protected] with questions.

Covid updates: Fauci has his first positive test for coronavirus