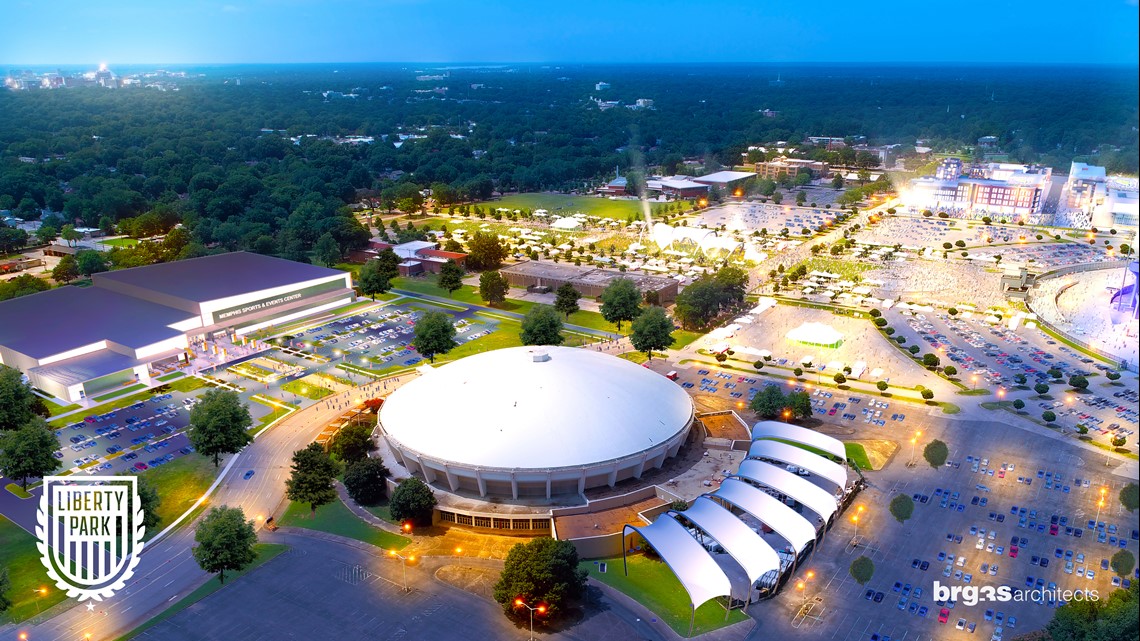 The mixed-use, public-private development and sports and events center is expected to begin its phased openings in 2022.

MEMPHIS, Tennessee – A tourist development zone requirement has been approved by the Tennessee State Funding Board for the development of Liberty Park at the former Memphis Fairgrounds in Memphis.

The mixed-use, public-private development and sports and events center is expected to begin its phased openings in 2022.

The plans include a hotel and an indoor sports complex. And Austin-based High Five Entertainment is planning a 65,000 square foot facility with a bowling alley, a laser tag, a ropes course, virtual reality simulations and an arcade.

Today, the Tennessee State Funding Board approved the issuance of Tourism Development Zone (TDZ) Bonds for the City of Memphis to directly fund new developments for Liberty Park.

The affirmative vote of the state of Tennessee guaranteed the feasibility of the project to go ahead and begin construction. The TDZ Bonds transaction is the result of resolutions approved for the issuance of TDZ Bonds in early 2021 by EDGE’s Board of Directors and Memphis City Council. The State Finance Board includes Governor Bill Lee, Comptroller Jason Mumpower, Secretary of State Tre Hargett, State Treasurer David Lillard, and Finance and Administration Commissioner Butch Eley.

“We appreciate our elected officials and leaders at the local and national levels for their support and votes to secure our vision for Liberty Park,” said Mayor Jim Strickland. “Liberty Park represents an intersection of so many elements – youth, community, sports, entertainment, public green spaces, tourism – that together make Memphis the place to be. We have a winning team to take us into the second half of this project. “

As part of the new Liberty Park developments, the City will make improvements to campus infrastructure; design and construct the Memphis Sports and Events Center (MSEC), a 227,000 square foot sports and events center; and begin construction along Central Avenue for a future 18-acre private mixed-use development, which will house public plazas, hotels, retail and restaurant spaces, and residential apartments.

The City of Memphis has issued a notice of prosecution to Turner Construction, which has been awarded a contract to begin preparatory work on site as early as Tuesday morning, May 25.

“Our project schedule remains on schedule and our construction team is ready to immediately begin the next phase of Liberty Park,” said Mary Claire Borys, administrator of strategic initiatives for the city’s housing and community development division. from Memphis. “We look forward to launching the Sports & Events Center while reinventing and restoring the Liberty Park campus to its true ‘park’ identity with infrastructure and landscaping plans.”

Liberty Park will be anchored in the MSEC, a state-of-the-art facility housing two multi-purpose venues with the ability to host multiple major tournaments simultaneously. The facility will include a hardwood pavilion with permanent hardwood courts for basketball and volleyball; a 75,000 square foot columnless event pavilion designed to host sporting events, trade shows, graduation ceremonies and more. The MSEC will also house a large cafe with indoor and outdoor seating and provide space for tenants in the community. Construction of the MSEC is expected to be completed in October 2022.

Local women-owned architecture firm brg3s is the go-to architect and builds on the centre’s initial design by internationally renowned planning and design firm Populous. The MSEC will be managed by Virginia-based Eastern Sports Management, a regional leader in the management of indoor sports facilities for competitive sports and recreation of all ages.

“We are ready to activate a local resource and a tourist destination in Liberty Park,” said John Wack, president of Eastern Sports Management. “We couldn’t be more excited to see the dirt move this week for the future Sports and Events Center.”

In addition, Liberty Park’s plans include improved public rights of way, new playgrounds and pavilions, a renovated Pipkin building, outdoor playgrounds at the MSEC, and a new athletics and football field at Tobey Park. The total budget for the redevelopment of Liberty Park by the city is $ 126 million; $ 70.6 million will come from TDZ bonds. When combined with private development plans, the Liberty Park project budget exceeds $ 200 million.

To date, the City of Memphis has signed Letters of Intent with Capstone Development Co. to develop two hotels in Liberty Park as well as Austin-based High 5 Entertainment to develop a 40,000 square foot indoor game room, with a bowling alley, bars and restaurant – and a 25,000 square foot outdoor miniature golf course. The City is in the midst of exclusive negotiations with Capstone and M&M Enterprises to jointly act as the site’s lead developer.

The Liberty Park campus today includes iconic and active destinations such as the Liberty Bowl Memorial Stadium and Tiger Lane, the Memphis Children’s Museum and the Kroc Center.

“This project is a great example of a public-private partnership,” said Norman Jenkins, President and CEO of Capstone Development Co. “We are all celebrating today’s milestone for Liberty Park. I am impressed by the City’s efforts to keep moving the project forward despite the pandemic last year. We are excited to be a part of the future of this campus. “

Mid-South Fairgrounds is now Liberty Park! There is a new future for the place. pic.twitter.com/DAvNJT8NbK

Liberty Park will have an indoor sports complex, hotel, restaurants and shops. pic.twitter.com/ZHCZCG5xlU