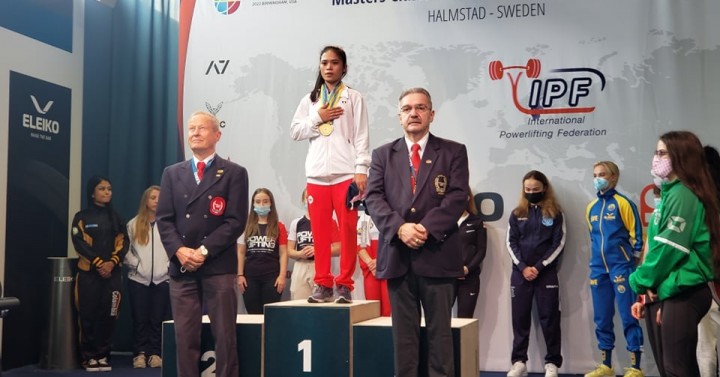 Matag-ob, Leyte’s Veronica Ompod and Jane Erasmo beat other powerlifters from around the world when they represented the country at the event from September 23-28.
Ompod, a member of the Philippine team, won four gold medals when all of her competitors failed to weigh themselves in the 43 kilograms (kg) junior women’s division.

“I’m grateful but at the same time a little upset because my competitors from Georgia and Sri Lanka were disqualified,” Ompod, 21, said in a telephone interview on Wednesday.

She also placed 1st at the Asia-Pacific Championship held in 2019 during her junior years.

She looks forward to competing again in December at the Asian Championship.

“I hope the Philippine Sports Commission will approve our funding so that I can compete and represent the country,” she added.

His teammate, Erasmo, who competed under 47kg sub-junior, won four bronze medals in his category for his first international competition.

She fought shoulder to shoulder with her Ukrainian competitor.

Both athletes from the town of Matag-ob are former LSA scholars in their high school years.

LSA, which started in 2010, is run by the provincial government of Leyte, developing local athletic talent to improve grassroots sports in the province.

LSA has since produced athletes who are now part of national teams and has competed in various international competitions. (ANP)

Biwer, Clayton and Hopcroff named CU Athletes of the Week, presented by Arrow