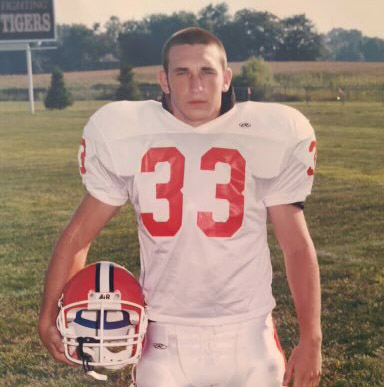 Joe Bevis will be inducted into the HOF

“It is an honor to be inducted into the Edwardsville Tigers Hall of Fame alongside so many other great Tigers teams, coaches and athletes,” Bevis said. “I’m sure we would all agree that our time at EHS was one of the most formative years of our lives and made us the people we are today.”

Bevis will be honored, along with all other re-charter first class inductees, at the Edwardsville boys’ basketball game on Feb. 11. A banquet will be held the following night at the American Legion Post 199.

On the football field, Bevis played linebacker and fullback for the Tigers.

Bevis was three times in the All-Southwestern Conference section and twice on the Chicago Tribune, Chicago Sun-Times and Champaign News-Gazette All-State first team.

As a senior in 1999, Bevis recorded a record 112 tackles with two interceptions and two fumble recoveries. He also had 850 rushing yards and nine touchdowns on 80 carries.

For his career, Bevis rushed for 3,058 career yards. He is one of the few running backs from Edwardsville to eclipse the 3,000 yard mark in program history.

On the wrestling mat, Bevis was a two-time state qualifier and an All-SWC multiple selection. He finished with a career record of 115-21.

Bevis took third place in the 2000 Class AA State Tournament in the 189-pound bracket. He is one of seven Tigers in program history to place in the top three at the state tournament.

In track and field, Bevis earned sixth place in the discus throw in 2000 at the Class AA state meet.

After EHS, Bevis played college football at the University of Illinois. He was the starting linebacker for the 10-2 Illini team that appeared in the Sugar Bowl in his junior season.

Bevis graduated from Illinois in 2004 with a degree in sports management. He then went to SIUE to work on his physical education certificate.

Community members can nominate nominations by visiting the Edwardsville High School Athletics website at http://ecusd7.org/ehs/athletics/. The nomination form is done via Google Docs. The link is listed above the sports/schedules section.

Information can also be found on Twitter at twitter.com/ehshof and on the Edwardsville High School Sports Hall of Fame Facebook page.

Rahul Dravid will bring a lot to the table, but it’s more about man management than coaching: Shane Warne