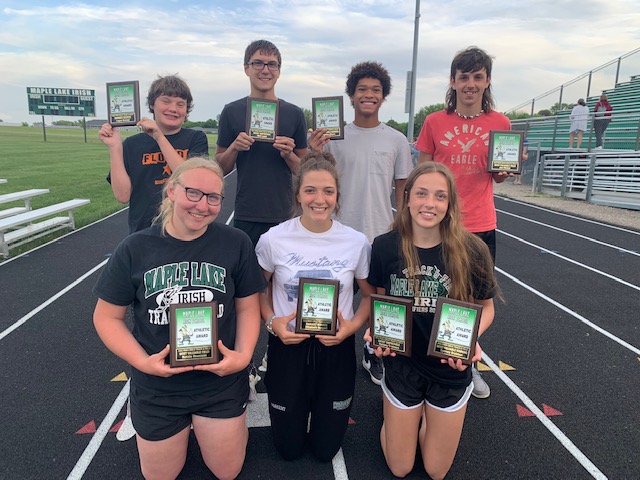 The boys’ and girls’ track and field teams at Maple Lake High School celebrated their season on Monday, June 6th at a year-end banquet. The boys finished fourth in the Central Minnesota Conference, fifth in Subsections, eighth in Sections and fifth in True Team Sections. The girls finished third in WCC, fourth in Section True Team, fifth in Subsections and seventh in Sections. Logan Bermel won the hardest worker award for the boys’ team and on the girls’ side, Elizabeth Borgert and Emily Weese earned the honour. Reese Hartkopf and Maddie Austin won the Came Out With a Bang award for the girls team and on the boys side the winner was Andreas Christiansen. The most improved honorable mentions went to Tristan Stoeber, Hans Peterson, Joe Rieber, Kingsley Okoro, Alan Haglin and Braden Peterson. Nick Lind won the most improved award. The most improved honorable mentions on the girls’ side went to Sydney Reardon, Emily Weese, Mackenna Wetch, Grace Praska, Avery Rowe and Joanna Hall. Sidney Breimon won the Most Improved title. The boys’ side MVP for running was Okoro and for the field was Rieber. The girls’ side MVP for running was Breimon and for the field was Natalie Neumann. Emily Weese was CMC Athlete of the Week; Eva McClelland, Sydney Breimon, Alex Kiebel and Avery Lee were named All-State and All-Conference varsity athletes were Addison Kramer, McClelland, Neumann, Rieber, Lind, Haglin and Okoro.