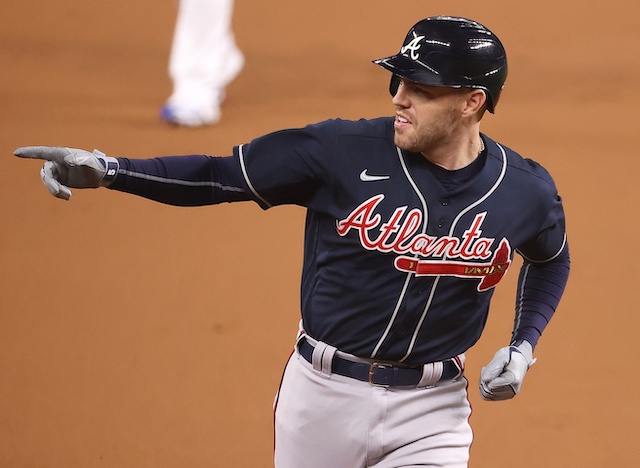 Several free agents signed contracts before the MLB lockout began in December, but Freddie Freeman was surprisingly not among the group.

The five-time All-Star helped lead the Atlanta Braves to their first World Series since 1995, and the general assumption was that both sides would quickly agree to a new free agency deal.

However, negotiations between Freeman and the Braves never gained much ground as they were thought to be at odds in a sixth year. The 32-year-old remaining on the open market has fueled speculation that he could potentially end up signing with the Los Angeles Dodgers or New York Yankees.

According to ESPN’s Buster Olney, some around baseball are increasingly convinced that Freeman will indeed leave the Braves when the lockdown ends:

So the industry perspective has changed; there is a growing belief that Freeman will land somewhere outside of Atlanta due to the impasse in his negotiations.

Braves legend Chipper Jones recently relayed that Freeman was harboring some frustration with the Braves over contract negotiations and would take offers from other teams, suggesting a split was plausible.

The idea that the Dodgers would pursue Freeman apparently became more likely when Corey Seager signed a 10-year contract with the Texas Rangers. The Southern California native isn’t a direct replacement for Seager at shortstop, but would still help balance LA’s roster more.

Alex Wood was among the players to sign before the free agency shutdown, returning to the San Francisco Giants on a two-year deal. A former teammate of Freeman, the southpaw expressed hope that he would re-sign with the Braves and not join the Dodgers in free agency.

Justin Turner, of course, disagreed with that preference and is among the Dodgers who would welcome Freeman to the team with open arms.

Are you subscribed to the Dodger Blue YouTube channel? Be sure to ring the notification bell to watch player interviews, participate in shows and giveaways, and stay up to date with all the Dodgers news and rumors!

The international community condemns the Russian decision in eastern Ukraine