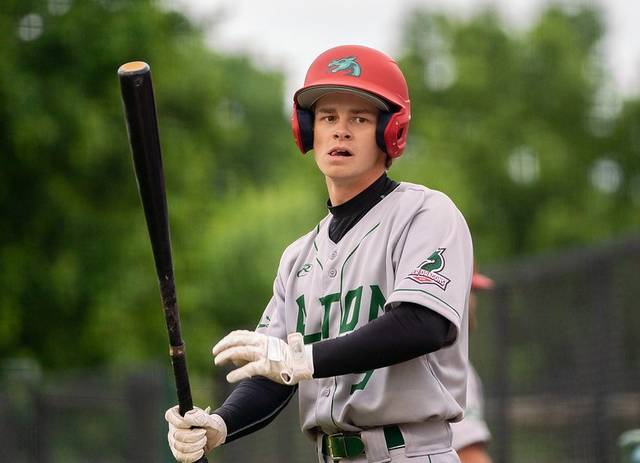 EHS graduate Burris is causing a stir with River Dragons

Pitchers Brandon Hampton and Adam Stilts, along with outfielder Blake Burris, have all carved out starring roles in the Prospect League squad, designed to introduce college players from across the United States to local fans and fans alike. Major League Baseball scouts.

LCCC interim coach Alex Ferguson, previously Randy Martz’s assistant coach until his retirement this year, said Hampton, Stilts and Burris have all established themselves as excellent student-athletes and he’s thrilled to see what they can do in the prestigious U21 League. He added that the creation of the River Dragons offers a great opportunity to its pioneers.

“Our goal was to start building a relationship with the River Dragons,” Ferguson said. “(GM) Dallas Martz and manager Darrell Handelsman have been great to work with. It will be a great learning experience for all three players. Adam Stilts and Blake Burris have both had great successes for us and we are delighted. of this opportunity for them to show their abilities. “

Burris, a graduate of Edwardsville High School, has been at LCCC for two seasons. With the Trailblazers, he turned into a legitimate baseball prospect. In 2021, Burris led the team in hits (44), runs (36), runs batted (26) and co-led homers with seven.

He also wasted no time in making a name for himself with the River Dragons, hitting the franchise’s very first home run in the team’s first home game at Lloyd Hopkins Field in Alton.

Burris chose the LCCC to play for coaches Martz, Ferguson and David Hopkins. He thanked the LCCC coaching staff for their improvement and success.

“It was all in the way we trained,” Burris said. “My approach improved a lot when I was at Lewis and Clark. Coach Martz and the staff worked a lot with me to swing me on better shots and catch better hitters, and the numbers really show it.

Burris has yet to announce where he will attend school and play next year. He said he would probably go into business, but only “if all baseball doesn’t work.”

Stilts, an Alton High School graduate entering his sophomore year at LCCC, said it was an honor to play for the River Dragons.

“It’s really exciting to be here,” Stilts said. “Not only do I have the chance to play with a great group of guys, but they are some of the best college and university players in the country. They are just fun to play with.

The right-handed hard-throw starter was the most prolific pitcher on LCCC staff this year as a rookie, leading the team in strikeouts (67) and innings pitched (64). He walked just 14 batters and had a 4.50 ERA. He’s committed to returning to the Trailblazers next year.

Stilts studied business with a focus on sports management, although his still focused on a career in baseball. He does, however, recommend the LCCC for its academics, alongside athletics.

“It’s a great school,” he says. “This is probably the nicest community college you will find. It feels like a university. The school side is very solid.

Hampton is the most experienced of the three Trailblazers and the oldest player in the River Dragons. After his two years of business studies at LCCC, he obtained a Bachelor of Business Administration from McKendree University.

In 2018 and 2019, Hampton amassed 112.2 innings to lead the team for the Trailblazers. The alumni of Civic Memorial High School have been a valuable asset to the River Dragons as a left-hander who throws in long relief. He struck out 11 catches in his first 10.1 innings on the mound, with a 3.48 ERA.

Hampton’s second year on the baseball field has been a particularly good one. The 2019 team broke a school record with 30 wins out of a 47-game schedule.

“I feel like this has been a real turning point for the Lewis and Clark baseball program, like we’ve been put on the map,” he said. “It’s always been a great recruiting program, but that year people started paying attention to Trailblazers baseball. Coach Martz made it a great program. Ferguson and Hopkins will certainly continue to build on it. They are doing a very good job. “

Hampton plans to return to McKendree University next year to begin his masters degree and continue his baseball career there. He has one year of eligibility left in compensation for the 2020 season lost amid the COVID-19 pandemic.