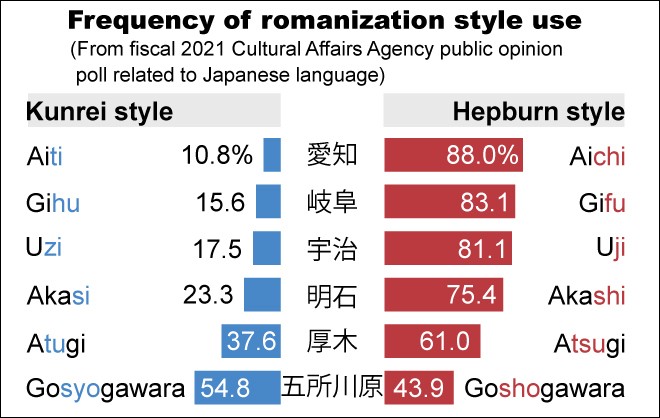 “Aichi” or “Aiti”, what is the preferred spelling?

This is one of the questions currently being asked by the Council for Cultural Affairs, which is considering ways to reduce confusion over the use of two different romanization systems for a language considered one of the languages ​​of the world.‘is the hardest to master.

A Cabinet notification issued in 1954 called for the use of the “kunrei” style of romanization when writing Japanese words in English. But the notice also allowed exceptions with the Hepburn style of novelization if circumstances made it difficult to change established writing habits.

The AJW website uses the Hepburn style, which is more commonly used by English-language publishers.

The results of a public opinion poll released on September 30 by the Agency for Cultural Affairs revealed a few instances where the kunrei style was the preferred choice of respondents.

The survey conducted in January and February asked 3,579 people aged 16 and over across Japan to indicate which style of romanization they preferred for various Japanese words.

The kunrei style is mainly learned during Japanese lessons in elementary school. But the Hepburn style is more often used in the romanization of Japanese names in passports as well as on street signs.

“People use the kunrei style unconsciously and there are various opinions about which style is better,” said an official from the Agency for Cultural Affairs. “We plan to host discussions on how novelization should be approached after further study of what works best.”

Toll road agency and tech company face off in court