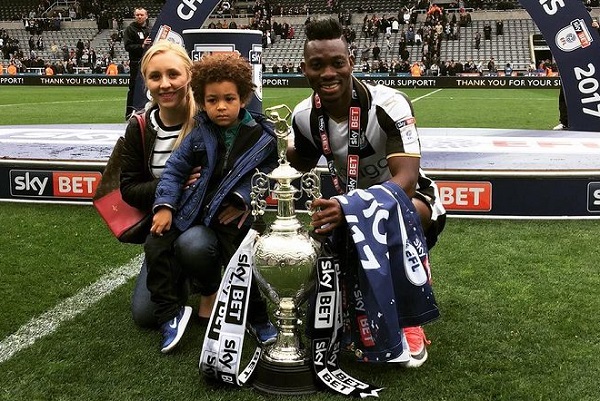 Christian Atsu with his wife and son.

He made 107 appearances for Newcastle and scored 8 goals during his five-year stint at Tyneside, but found playing time difficult to find in the English Premier League season which has just ended.

Speaking about his departure from the club on Instagram, Atsu expressed his gratitude to fans and club staff for making him feel welcome.

He said: “When I arrived at Newcastle almost 5 years ago I felt welcomed from the start .. by everyone at the club and especially by the fans. I have grown to love the city and my young family feel very comfortable here. Unfortunately now is the time for me to leave the club so I just wanted to say a big thank you to everyone who is part of the Newcastle Utd family. Toon Army, many of whom I have met all over town. I will never forget my time in the North East and of course I will follow the results every week. Thanks to my geordie staff, players and fans, that was a pleasure !! “.

Atsu was excluded from Newcastle’s 25-man squad in the Premier League at the start of the season, but was later added again in January, after DeAndre Yedlin left for Galatasaray.

However, Atsu was not called to the bench once in the final months of the 2020/21 campaign, although Bruce’s Magpies suffered an injury crisis with Callum Wilson, Allan Saint-Maximin, Joelinton, Miguel Almiron. and Ryan Fraser who all spent time out of the side.

He has been linked with a move to championship side Huddersfield Town.