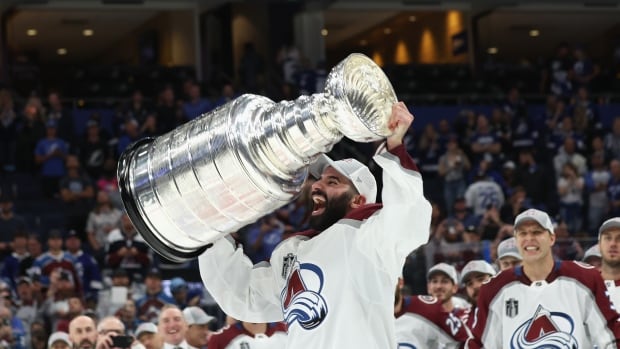 The Calgary Flames are closing in on a deal to sign unrestricted free agent Nazem Kadri, according to multiple media outlets.

TSN reported that the deal is for seven years.

Kadri, 32, was one of the biggest names available in free agency after an all-star season with Colorado that ended with the Avalanche winning the Stanley Cup.

He added 15 points (seven goals, eight assists) in 16 playoff games, including the overtime winner of Game 4 of the Stanley Cup Finals against Tampa Bay. It was his return to action after suffering an injury in Game 3 of the Western Conference Finals after being hit from behind by Edmonton forward Evander Kane.

Kadri’s signing would be the final chapter in a chaotic offseason for the Flames.

Calgary lost leading scorer and Hart Trophy contender Johnny Gaudreau to the Columbus Blue Jackets early in free agency, then was told star forward Matt Tkachuk would not sign a contract extension past the upcoming season.

The Flames sent Tkachuk to Florida on a package that included forward Jonathan Huberdeau, who had 115 points last season, and defenseman Mackenzie Weegar.

The Flames then locked up Huberdeau long-term with an eight-year, US$84 million contract extension.