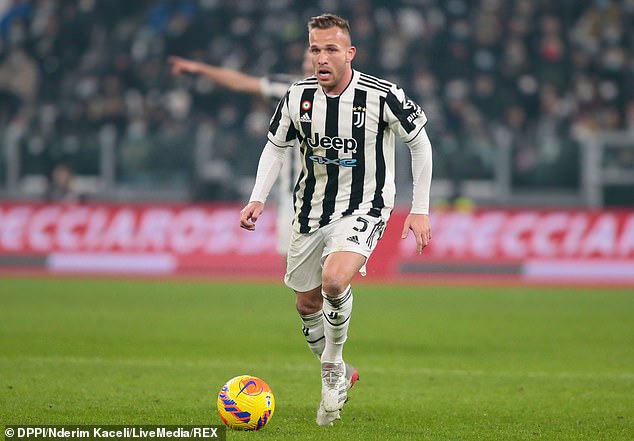 By Luke Augustus for MailOnline

Arsenal are stepping up their pursuit of Arthur Melo with the midfielder’s agent in London in hopes of securing a deal.

According to Gazzetta dello Sport, Arthur’s agent Federico Pastorello traveled to the English capital to lay out his client’s desire to join the Gunners.

They claim he spoke to Arsenal technical director Edu on Wednesday to set out terms – which Arthur hopes will be for 18 months.

The length of this move is due to the fact that the Juventus midfielder wants to be able to acclimate fully to the demands of the Premier League – rather than only having half a season.

Arthur has already opted out of Turin this month and plans to join Arsenal on loan.

As detailed by Sportsmail, the 25-year-old former Barcelona star is keen to make the move but is waiting for Juventus manager Massimiliano Allegri to give the green light to the deal.

Mikel Arteta is keen to bring in reinforcements after allowing Ainsley Maitland-Niles to join Roma.

The talks are ongoing as Juventus would like to sell the player outright or insert an obligation to buy once the loan ends.

However, a stumbling block in any deal could be Juventus’ continued interest in Thomas Partey.

Arsenal have no desire to lose their power in midfield and Juve’s options in midfield will be slim if a replacement for Arthur is not found.