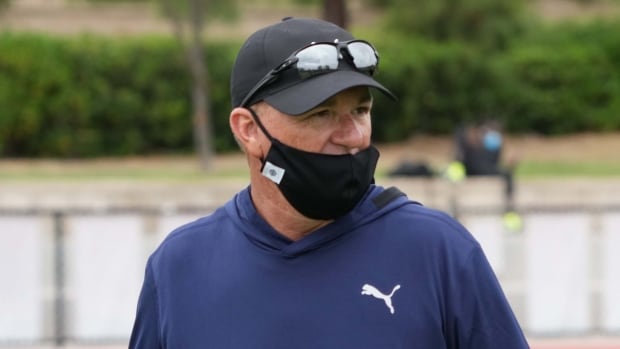 Florida-based Rana Reider has coached the Olympic 200-meter gold medalist for the past two seasons, most notably at the 2019 world championships in Doha, where De Grasse won silver and bronze.

In a statement, Athletics Canada said it learned of the reports against the sprint coach on Wednesday through an article in the Guardian newspaper.

“We immediately referred the matter to our independent office of the commissioner for investigation,” said the sports organization.

Later Thursday, Athletics Canada said its commissioner’s office confirmed with the United States’ Center for SafeSport, which oversees investigations into abuse in the sport, that an investigation is underway.

CBC Sports also contacted the center but did not receive a response.

In a statement to The Globe and Mail, the center said it “does not comment on matters designed to protect the integrity of the investigative process.”

Although Reider is not a member of the organization or a Canadian citizen, he coaches Canadian athletes.

In a statement regarding Reider, British Athletics also said “an investigation in the United States is imminent”.

The sport’s governing body said it had “advised British athletes currently trained by it to cease all association until this process is concluded.”

The track and field coach has been recognized for helping De Grasse make the necessary changes that led to the athlete’s continued success on the track.

Reider also coached the reigning women’s 100-meter hurdles world champion Nia Ali, who is De Grasse’s partner. His Tumbleweed Track Club in Jacksonville, Florida is also the training base for Adam Gemili of Great Britain and Trayvon Bromell of the United States.

“Too early” to assume complaints are valid, lawyer says

Meanwhile, CNN reported that Reider’s attorney, Ryan Stevens, confirmed that SafeSport had assigned an investigator “to perform interviews and other work” for the complaints.

In a statement to CBC News, Stevens confirmed that Reider had not received notification of the agency’s allegations or evidence.

“This process has barely begun in this case involving Rana. It is manifestly unfair to Rana that her hard earned reputation is dragged through the mud before any due process or investigation,” he said.

“It is far too early to assume, these days, that the fact that a complaint is made – especially if there are ulterior motives – has any validity. A full and fair investigation must be carried out, and it must be investigated. was not – not by SafeSport and not by British Athletics. “

I can get the best of Luke Brooks, says Andrew Johns