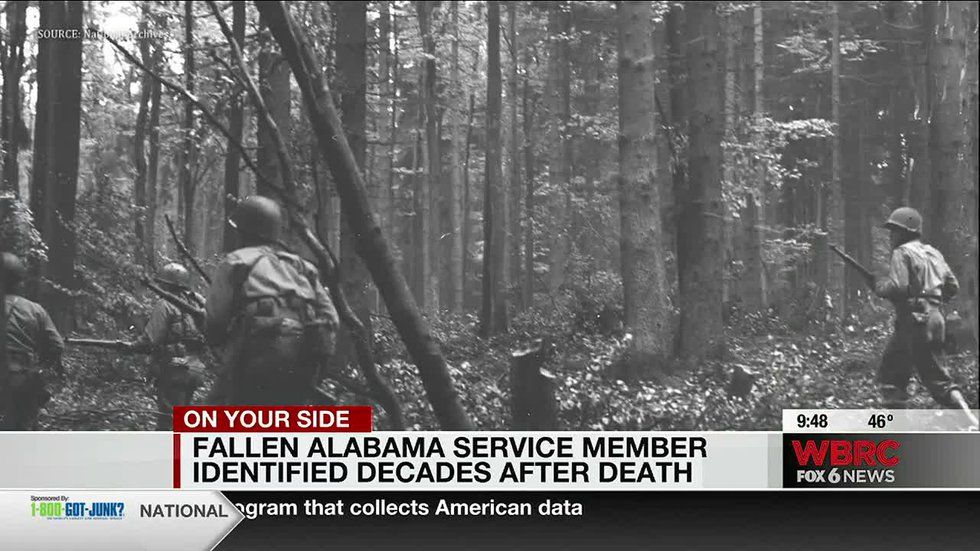 BIRMINGHAM, Ala. (WBRC) – Service members take a solemn oath never to leave a fallen comrade, and while the realities of war may delay that promise, the Defense POW/MIA Accounting Agency (DPAA) guarantees that it is not never broken.

“The purpose of the DPAA is to locate and recover our still missing or untraceable service members from all of our past conflicts, dating back to World War II,” said Sergeant First Class Sean Everette, DPAA spokesperson from the American army.

There are more than 81,600 service members missing and SFC Everette said half of them are presumed lost at sea and considered unsalvageable.

“That still leaves around 40,000 people who we consider recoverable. And our whole mission, our whole purpose is to find these military personnel and bring them home for their loved ones and for the nation.

Their singular mission takes them all over the world, with recovery operations in Vietnam, the Solomon Islands and in the case of a missing soldier in Birmingham, Germany.

Army Private First Class Bill Morrison enlisted in October 1941 and was deployed overseas to fight in the European theater of World War II. But for decades, his service story was told with a three-letter accident code, FOD, which stands for Conclusion of Death.

According to the National Archives, “Death attestation is the means of establishing presumptive death when the evidence concerning the fact and date of death is insufficient and the circumstances surrounding the death are unknown. A declaration of death can be made at any time after the expiry of twelve months of absence when a person is absent, missing or missing (location unknown) and the information received or a period of time without information establishes a reasonable presumption that he is no longer alive.

The mystery of Pfc. Morrison’s death survived his closest relatives. There are no known photos of him and little was known about his sacrifice until now.

DPAA historians tracked Pfc. Morrison’s unit crosses into Germany for a battle in the Rafflesbrand sector of Hurtgen Forest. He was reportedly killed in action on November 8, 1944 but amid fierce fighting his body could not be found.

After World War II, the American Graves Registration Command (AGRC) was tasked with locating and recovering servicemen missing in Europe. This team spent a lot of time in Hurtgen Forest between 1946 and 1950 but couldn’t find Pfc. Morrison’s remains.

It was declared unrecoverable in 1951.

Between 1946 and the declaration of Pfc. Morrison not salvageable, the AGRC have been alerted to unidentified remains discovered by a German citizen in Hurtgen Forest. These remains were designated X-4470 Neuville and interred at the Ardennes American Cemetery in Belgium.

“[DPAA historians] know these unknowns in these cemeteries. They know, based on the records, roughly where the remains were found, so they take the records on the unknown and then compare those records with people who went missing in the same area where the unknown was found ”, explained SFC Everette. “They go through it and they do all these comparisons and then they’re able to determine that this person, this specific stranger buried in this cemetery, might be [this missing soldier.]”

After finding where they believed PFC. Morrison was buried, SFC Everette said the next step was to obtain a DNA family reference sample. In some cases, family members contact the DPAA and share samples, in others, DPAA genealogists must trace family members. SFC Everette said the remains cannot be exhumed until the DPAA has a DNA family reference sample.

Pfc. Morrison’s remains were exhumed from the cemetery in Belgium in July 2019 and transferred to Offut Air Force Base in Nebraska for the identification process.

DNA is taken from the remains and compared to the family sample. Once all the scientific and circumstantial evidence has been gathered, the agency‘s medical examiner makes a final decision.

“It’s time to let his family know we found him and he can go home to Alabama,” SFC Everette said.

He added, “We always make a solemn promise as a nation to these service members and their families to bring them home, and that is why DPPA is doing what we are doing, we are fulfilling this solemn oath.”

Pfc. Morrison will be buried at the Alabama State Veterans Memorial Cemetery at Spanish Fort on March 4.

According to the DPAA, there are more than 1,200 missing service members from Alabama.

CLICK HERE TO GET THE WBRC FOX6 NEWS APP

Subscribe to our WBRC newsletter and get the latest local news and weather delivered straight to your email.